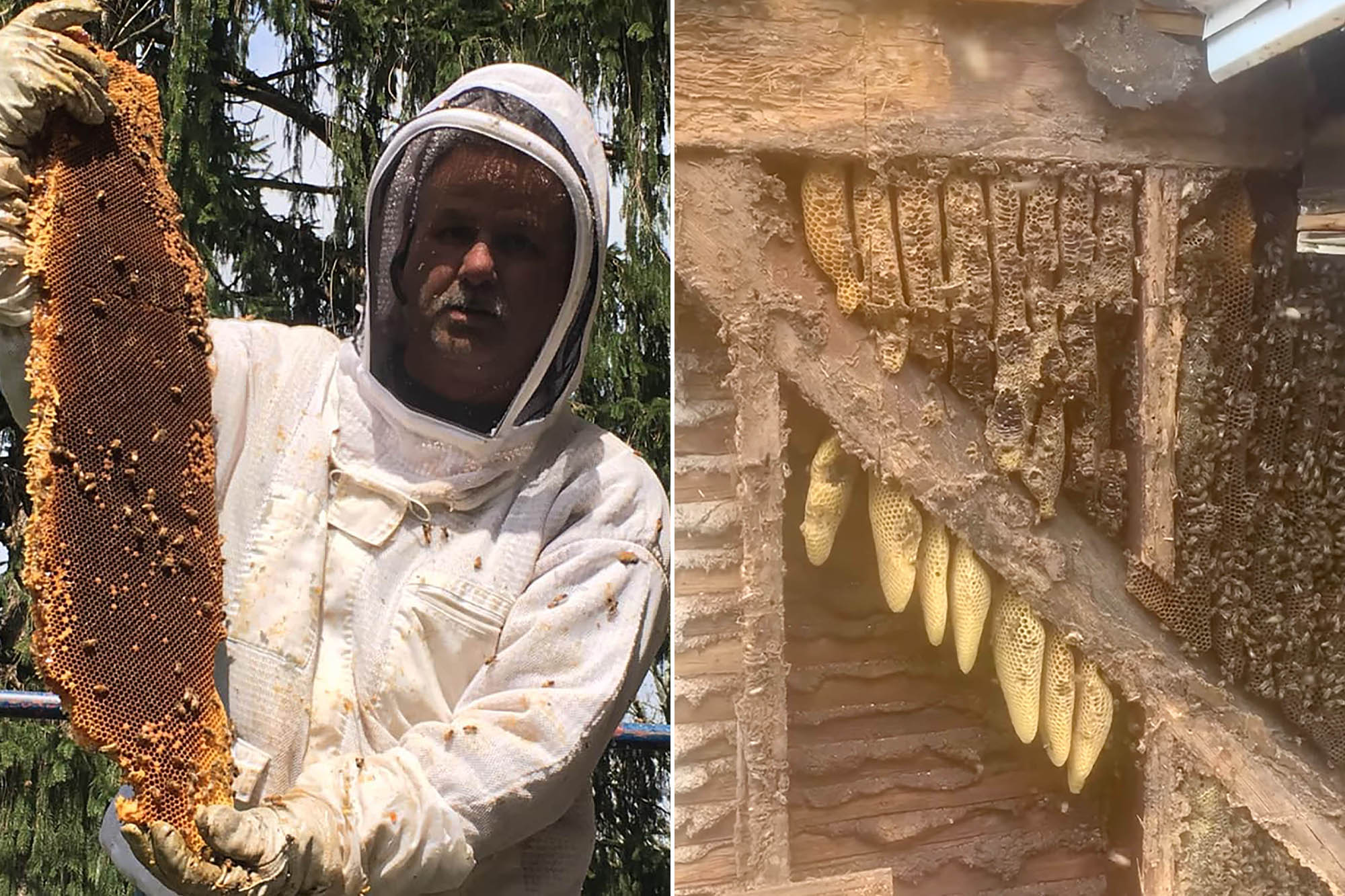 These bumbling tenants just had their lease abruptly terminated.

An enormous colony of honeybees shacking up in the walls of a Skippack, Pennsylvania, farmhouse for nearly 35 years has been moved to less residential pastures. Their prolonged rent-free stay came to a sudden end late last month after the house’s new owners discovered the buzzy squatters and paid a professional to kick them out and take them home to his honey farm.

“On the seller’s disclosure, it said ‘bees in wall,’” homeowner Sara Weaver told CNN of the only warning she received that her new property contained almost half a million tiny flying residents. Despite the cautionary notice, Weaver and her husband didn’t do a home inspection since they were “just so floored that we actually found land in the [school] district that was within our price range.

“I didn’t really ask any questions about those bees,” she added. “I didn’t think it would be that big of an issue.”

Through the winter, it wasn’t, but once warmer weather arrived, it became apparent that the colony was humongous.

“[When] spring arrived that’s when we started to see them,” Weaver said.

Suddenly, she realized that she had in fact received one other warning, although she didn’t know it at the time.

“[Now] that I’m thinking about it, I originally thought it was dirt on the windows that I cleaned but it was probably honey because there were drip marks,” she said, calling the condition of the 1872 property “horrendous” when they bought it.

To get rid of their well-lodged borders, the couple paid experienced area beekeeper Allan Lattanzi $12,000 to remove them over the course of a week. When Lattanzi showed up at the house for the job, it looked familiar, and then he registered. Lattanzi said that four years earlier, the former owner had him look into evicting the bees but, unable to pay the price of removal, had sold the home instead.

“The bees were docile for a colony that has been in there for a while,” he commented of the insects’ demeanor. “Normally when a colony is in a dwelling for a while, they’re usually defensive.”

This colony, however, only stung him “five or six times” in the course of the weeklong removal.

With the bees safely relocated to Lattanzi’s Yerkes Honey Farm, Weaver and her husband tell CNN they once again feel like they’ll be able to eventually move into the farmhouse. Meanwhile, the current tenants report they were unbothered by their former housemates.

The Activision Blizzard lawsuit could be a watershed moment for the business world. Here’s why

[ad_1] The unfolding crisis, and the response to it from employees, echoes similar controversies at major tech firms. And the fallout from what happens at Activision Blizzard is likely to…

What we still don’t know about Beirut’s port explosion

[ad_1] “I think he should resign. I understand that the state legislature may decide to impeach. I don’t know that for a fact,” Biden said in response to a question…

Fact check: Does Biden have the authority to extend eviction moratorium without Congress?

[ad_1] In her latest move, the singer posted a TikTok pretending to be pregnant with Captain America’s baby. “This is something that I’ve been really trying to keep personal and…

The 2021 Met Gala will require guests be vaccinated, masked indoors

[ad_1] The founder of the HGTV network, Kenneth Lowe, just scored a luxury New York City condo on Billionaires’ Row for a whopping $12.7 million in an all-cash deal —…

The ‘queen of vegan cheese’ wants to change the dairy industry

While they were asleep, their Teslas burned in the garage. It’s a risk many automakers are taking seriously.

[ad_1] The fire inspector cited the thermal management system in one of the Tesla Model S sedans as one of two possible causes in the blaze, which showed what can…

Gilbert Levin, scientist who sought to detect possibility of life on Mars, dies at 97

WHO calls for moratorium on vaccine booster shots

If you are playing 4 fast bowlers, Jadeja has to be first-choice: Harbhajan

[ad_1] On seaming English tracks where spinners are going to be used sparingly, Ravindra Jadeja, with his restrictive wicket-to-wicket bowling and superior batting, was always going to trump…

[ad_1] Prof Sarah Gilbert has had quite a year. The co-creator of the Oxford/AstraZeneca jab has been made a dame, been given an emotional standing ovation at Wimbledon – and…