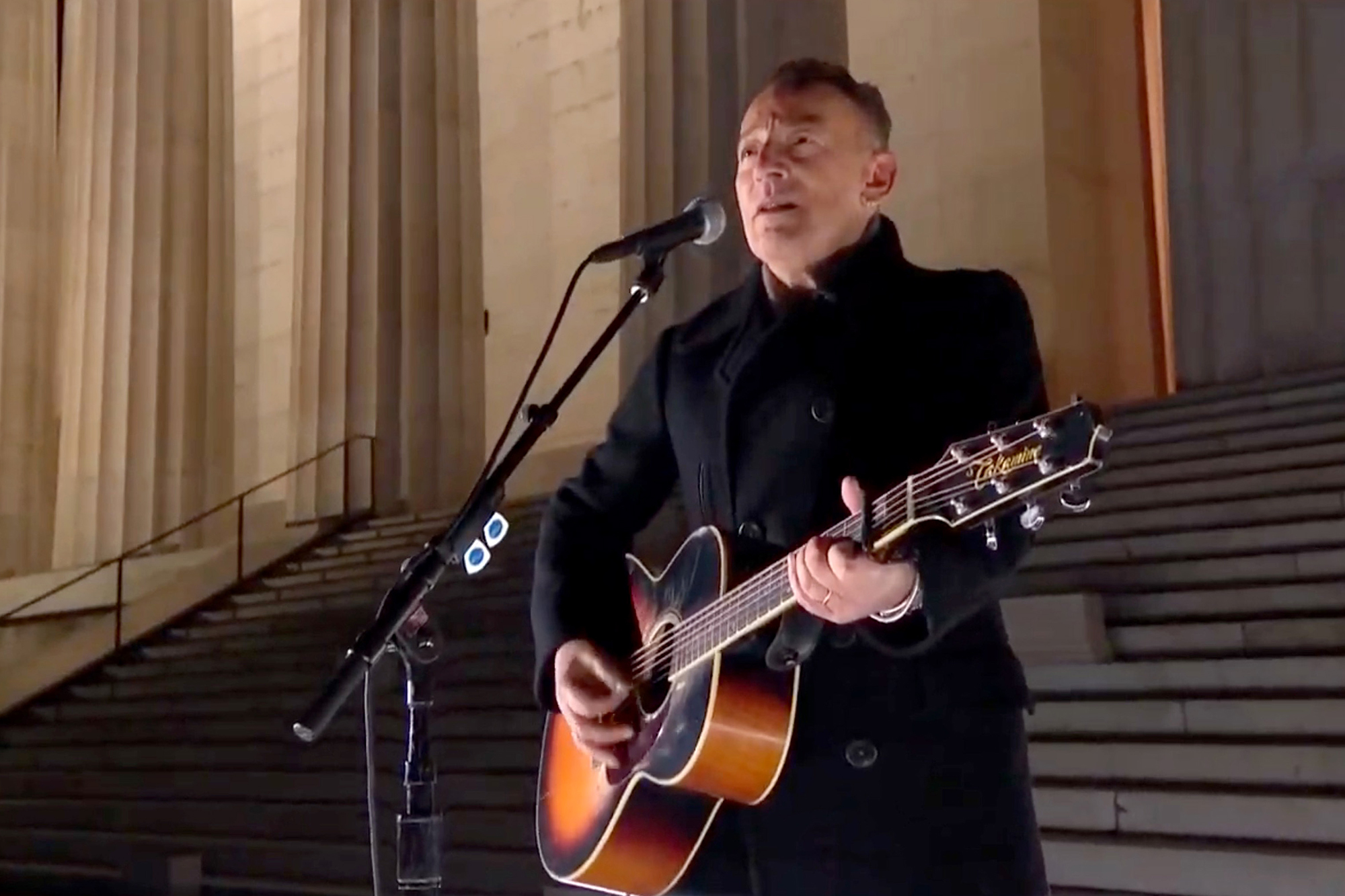 Accompanied only by a guitar on the steps of the Lincoln Memorial — with the lit National Mall and Washington Monument beckoning in front of him — Springsteen, 71, offered a “small prayer” for the country before serenading with his 1999 song “Land of Hope and Dreams.”

Hanks — who along with his wife, Rita Wilson, fought the coronavirus earlier last year — talked of witnessing “deep division” and “rancor” across the country in recent years.

“Tonight we ponder the United States of America, the practice of our democracy, the foundations of our republic, the integrity of the constitution,” as well as the “dreams we share,” Hanks, 64, said.

After a herald from US Army trumpets, President Joe Biden offered his own greeting from the base of Lincoln’s statue.

“We’ve learned again that democracy is precious and, because of you, democracy has prevailed,” he said. He went on to list issues the nation faces — the coronavirus pandemic, economic crises, racial injustice and more — and made a call for “unity” in order to defeat obstacles.

“The question is: Are we up to it? Will we meet the moment like our forbearers have?” he said. “I believe we must and I believe we will.”

Biden’s speech was followed by Ant Clemons and Justin Timberlake, who joined for a pre-recorded duet of soulful tune “Better Days,” featuring Kirk Franklin as well as Black Pumas who performed “Colors” from Austin, Texas.

Dave Grohl, 52, of Foo Fighters paid tribute to “unshakeable teachers” like his own mother, Virginia, who “face unprecedented challenges” but still manage to “enlighten our kids” before performing a slowed-down “Times Like These.”

Later, from Los Angeles, 28-year-old singer Demi Lovato — sporting her new short, pink pixie cut — served up an energetic take on “Lovely Day” with help from celebs and everyday Americans who beamed in as her background vocalists.

And for the finale, pop star Katy Perry — elegantly wrapped in white — blasted her 2010 hit “Firework” as pyrotechnics lit up the Washington Monument.

The Canada Pension Plan Investment Board accepted the resignation of Chief Executive Mark Machin, a day after The Wall Street Journal reported he had traveled to the United Arab Emirates…

China’s Campaign to Crush Democracy in Hong Kong Is Working

India Returns to Growth, but Recovery Divides Rich and Poor

U.S., South Korea Near a Deal Over Cost of U.S. Forces on Peninsula

Republican Reps. Mario Diaz-Balart of Florida and Elise Stefanik of New York were two of eight GOP lawmakers who joined House Democrats to vote for the Equality Act during the…

What you can expect to get from the stimulus

Covid-19 cases discovered on one US Navy ship in Middle East, suspected cases on a second

The casting is certainly impressive. Hammer portrays Jake, an undercover agent trying to catch Fentanyl traffickers, with separate threads featuring Gary Oldman (currently seen in the much-better “Mank”) as an…

These former co-workers turned out to be closer than colleagues.  When two Connecticut women met on the job, they immediately became friends, not realizing until years later that they were…

Pie in the sky: Skydivers share pizza in 14,000-foot plummet

House poised to vote on legal safeguards for LGBTQ people

‘It’s a basic human right’: the fight for adaptive fashion

The UK culture secretary has said Facebook’s recent decision to ban Australian users from accessing news on its platform was concerning, and said the firm was “putting its bottom line…

Millions of low-income Americans to get up to $50 subsidies for their monthly Internet bills under newly finalized U.S. program

The dark side of the Chippendales – podcasts of the week | Podcasts

In a shift from years past, the NBA league office will require college seniors to petition the league for inclusion on the NBA early-entry list in order to become draft-eligible…

New faces in new places, top prospects and more: What we’re most excited for as spring training games begin

‘You can just see his heart’: Gideon George’s mission to use basketball to give back

Who’s the top 2020-21 player of the year candidate in every women’s college basketball conference?

The coronavirus variant first detected in the U.K. late last year now accounts for up to 10% of COVID-19 cases in the U.S., officials said Friday. The 10% marks an…

IndianOil Corporation (IOC) will invest Rs 32,946 crore to increase capacity of its Panipat refinery to 25 million metric tonnes per annum (mmtpa). IOC told the BSE the…

The great unknown: do Covid vaccines stop you spreading the virus?

As Australia joins the worldwide Covid-19 vaccine rollout, researchers keep emphasising that while we know the various vaccines in use are strong at preventing hospitalisation and severe disease, it’s less…