Bitcoin has shot to a record just as billions of institutional dollars have fled gold.


Whether that’s a simple coincidence or the start of a rotation that would have a profound impact on crypto and the precious-metals market is impossible to know for sure. But the debate is now heating up on whether the world’s largest digital currency can one day rival bullion as an inflation hedge and portfolio diversifier.


Bitcoin’s tumble last week, the biggest since March, after a 150% run-up this year underscores the famous volatility of the asset class that has kept mainstream investors at bay. Yet if they start moving just a small portion of their gold holdings into the $350 billion Bitcoin industry, it would be a game-changer for diversification strategies on Wall Street. 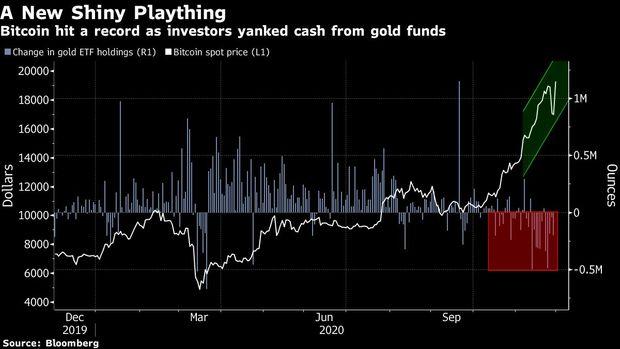 Bitcoin Fights Back With Power, Speed and Millions of Users


The digital currency is a trading ground for a motley crew of retail players, speculative pros and exotic quants, while traditional investors have hitherto stayed on the sidelines. That seems to be changing with Guggenheim Partners LLC just the latest manager to join the bandwagon, alongside Paul Tudor Jones and Stan Druckenmiller.


Funds like family offices are selling their gold exchange-traded funds holdings for the digital currency, according to analysts at JPMorgan Chase & Co. Bullion-backed funds have dropped 93 tons of metal, worth some $5 billion since Nov. 6. Grayscale Bitcoin Trust, the preferred vehicle for institutional investors, has doubled in dollar terms since the start of August.


Bitcoin’s market capitalization is currently only 3.1% the size of gold, according to James Butterfill, investment strategist at CoinShares, which sells investments in digital currencies. If that increased to 5%, it would imply a price of $31,300 compared to around $18,700 currently, he estimated.


“Bitcoin is establishing itself as a credible store of value,” Butterfill said. “This is particularly appealing during this time of unprecedented loose monetary policy. For these reasons investors are naturally comparing it to gold.”


Still, there are good reasons for bullion’s poor performance recently, like progress toward a coronavirus vaccine that has reduced demand for havens. With market-derived inflation expectations relatively stable, one conclusion might be that gold is simply moving along with animal spirits, while Bitcoin has been in a speculative fervor.


The latter has also found a fan at the world’s largest asset manager — evidence of its growing appeal on Wall Street. The currency is “here to stay” backed by demand among millennials and its strength as a medium of exchange, BlackRock Inc. Chief Investment Officer for Fixed Income Rick Rieder told CNBC in a recent interview. Trading Bitcoin “is so much more functional than passing a bar of gold around,” he added. 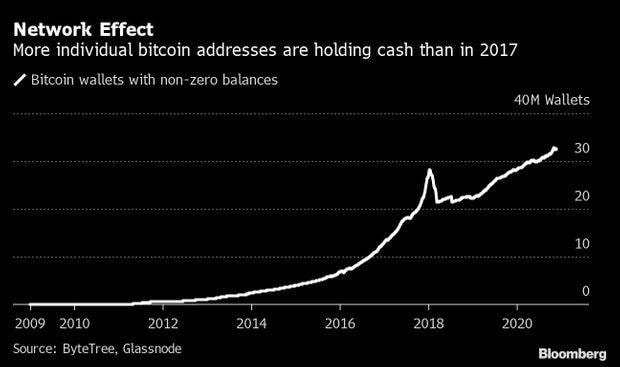 One of the differences between the two is that all transactions can be viewed on the blockchain, while a large part of gold trade takes place on London’s over-the-counter market, where less data is available.


“The transparency in Bitcoin is helping drive a lot of interest,” said Lyle Pratt, an independent investor who owns Bitcoin. “Gold is kind of like a blackbox, you have to trust the custodians to tell you about any flows in the market.”


For Plurimi Wealth LLP’s Chief Investment Officer Patrick Armstrong, who allocates 6.5% of his discretionary funds into gold, even if Bitcoin has potentially bigger upside in an inflationary spiral, the risks are just too big. Gold also has a long history as a store of value that Bitcoin can’t match. There’s always the nagging suspicion that another, potentially central-bank backed, digital currency could supplant it.


“If the debasement trade works, it is very possible Bitcoin works better,” he said. “But it is also possible Bitcoin has no value in years to come, while I do not think the same can be said of gold.”


One thing that’s clear is Wall Street is taking Bitcoin seriously in a way that it didn’t in 2017. “I have changed my mind!” wrote Sanford C. Bernstein strategist Inigo Fraser-Jenkins in a report Monday. Bitcoin won’t replace gold, but there’s room for both, he said, especially if the future is one of inflation and extreme debt levels.


“I see it as being complementary,” he said in an interview. “Whatever one’s starting position was before the pandemic in terms of what your gold and crypto allocation should be, I think it should be materially larger now.”

Written by Oscar Holland, CNN Standing out next to established style icons like Michelle Obama and Lady Gaga was always going to be a tough gig. But on a day…

How airbag jeans and high-tech vests could make motorbikes safer

Now his family was in danger, hiding in Majority Whip Steny Hoyer’s ceremonial office as insurrectionists surrounded the House chamber. Raskin’s chief of staff, Julie Tagen, who was with Tabitha…

Biden raises the bar on vaccines and suggests US will get to 1.5 million a day

Leahy, not Roberts, expected to preside over impeachment trial

Sarah Ferguson talks ‘The Crown’ depiction: ‘I thought it was filmed beautifully’

There was one British royal who admitted to watching “The Crown.” The Netflix series traces the nearly 70-year reign of Queen Elizabeth II. While the historical drama has been much…

Elizabeth Hurley goes nude under her coat while posing in the snow: ‘How could I resist?’

Justin Bieber reflects on his 2014 arrest: ‘God has brought me a long way’

This My Little Pony collection sure ain’t little. Beatrice Salt, 27, is wild for horses and has spent over $27,000 (£20,000) on her collection of colorful ponies that take up…

‘Come for the quips but stay for the coats’: the enduring style of Fran Lebowitz

You had me at pomelo: three satisfying summer salads from Asia Unplated

9:40 AM ET Mechelle VoepelESPN.com Close Mechelle Voepel covers the WNBA, women’s college basketball, and other college sports for espnW. Voepel began covering women’s basketball in 1984, and has been…

Yanks send Ottavino to Sox in rare deal for rivals

‘I still have trouble with it’: One year on, Lakers stars struggle to come to terms with Kobe Bryant’s death

What does trading Matthew Stafford mean for the Lions in value and their future QB?

LOS ANGELES (AP) – It’s crowded in the back of the ambulance. Two emergency medical technicians, the patient, the gurney — and an unseen and unwelcome passenger lurking in the…

Is there a bubble in financial markets?

The above title seems to be the topic of the moment among financial market participants. There are strong arguments both for and against, with investment luminaries taking both…

Did you solve it? Irresistibly small and intolerably cute

Earlier today I set you 12 micro puzzles. (There’s an extra one at the bottom of this article.) The first six were ‘equatum’ puzzles: Replace each letter in the word…

I’ve had my first vaccine jab. It gives me hope of liberation… but not yet