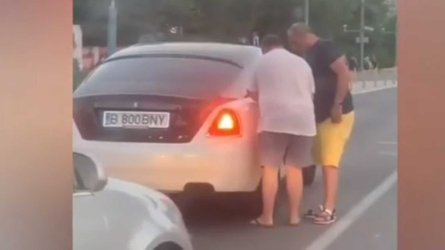 21.2 liters / 100 km (a measly 11 mpg) – that’s the fuel consumption quoted by Rolls-Royce in the city for the Wraith coupe and its massive 21.9-gallon (83-liter) fuel tank. That seems just about right considering the opulent two-door vehicle weighs a hefty 2,360 kilograms (5,203 pounds) and is powered by a massive V12 6.6-liter engine equipped with a pair of turbochargers.

The owner of Goodwood’s posh gas-guzzler discovered his car is thirsty in the worst way possible by running out of fuel in a crowded intersection in Mamaia, Romania. Blame it on a defective fuel gauge (highly unlikely) or the driver’s inattentiveness, it’s without a shadow of a doubt an embarrassing experience, especially when you’re coming out of an expensive car such as a Rolls-Royce.

With just about everyone owning a smartphone these days, it goes without saying his mishap was all caught on camera, from various angles at that. He made not just the local news, but basically all the main news channels in Romania, with the car’s license plate appearing in the footage. Running out of fuel just ahead of a busy roundabout caught the attention of other drivers, and some of them didn’t hesitate to shoot videos.

Towards the end of the clip, a friend (or simply another driver who noticed his predicament and decided to help) comes to the rescue with a small plastic can filled with gasoline. People on social media are saying the apparently green fluid is AdBlue rather than gasoline, but we’ll remind those people there’s no such thing as a diesel Rolls-Royce Wraith that would need the liquid used to reduce the nitrous oxide emissions. The container is green and it’s pretty obvious the gasoline in it has the normal color.

Taking into account how much fuel the lavish coupe needs, the gasoline poured into the tank was likely just enough to reach the nearby gas station. Carrying fuel in a plastic container is a different story as it could be quite dangerous, especially on a hot summer day as was the case here. That appears to be a plastic can from washer fluid, so it’s certainly not suitable to transport fuel.

The Activision Blizzard lawsuit could be a watershed moment for the business world. Here’s why

[ad_1] The unfolding crisis, and the response to it from employees, echoes similar controversies at major tech firms. And the fallout from what happens at Activision Blizzard is likely to…

What we still don’t know about Beirut’s port explosion

[ad_1] “I think he should resign. I understand that the state legislature may decide to impeach. I don’t know that for a fact,” Biden said in response to a question…

Fact check: Does Biden have the authority to extend eviction moratorium without Congress?

[ad_1] In her latest move, the singer posted a TikTok pretending to be pregnant with Captain America’s baby. “This is something that I’ve been really trying to keep personal and…

The 2021 Met Gala will require guests be vaccinated, masked indoors

[ad_1] The founder of the HGTV network, Kenneth Lowe, just scored a luxury New York City condo on Billionaires’ Row for a whopping $12.7 million in an all-cash deal —…

The ‘queen of vegan cheese’ wants to change the dairy industry

While they were asleep, their Teslas burned in the garage. It’s a risk many automakers are taking seriously.

[ad_1] The fire inspector cited the thermal management system in one of the Tesla Model S sedans as one of two possible causes in the blaze, which showed what can…

Gilbert Levin, scientist who sought to detect possibility of life on Mars, dies at 97

WHO calls for moratorium on vaccine booster shots

If you are playing 4 fast bowlers, Jadeja has to be first-choice: Harbhajan

[ad_1] On seaming English tracks where spinners are going to be used sparingly, Ravindra Jadeja, with his restrictive wicket-to-wicket bowling and superior batting, was always going to trump…

[ad_1] Prof Sarah Gilbert has had quite a year. The co-creator of the Oxford/AstraZeneca jab has been made a dame, been given an emotional standing ovation at Wimbledon – and…